Fun Fact Friday From Zoo 4 You!

Meerkats are native to Southern Africa and they live in large family groups known as a “mob”. Meerkats have amazing peripheral vision which allows them to survey their surroundings for possible predators, they do this standing on up on their back legs! In the wild, meerkats dig incredible burrows that are linked through a tunnelling system. Meerkats have a special layer over their eyes that protects their sight from dirt whilst burrowing, they also have the ability to close their ears!

The Meerkat is our Zoo 4 You animal of the week!

The Barbados Threadsnake is the worlds smallest snake, measuring a minuscule 4 inches long! This species of snake was discovered in 2008, it had previously been misidentified and it is believed to only inhabit Barbados. It is thought not only to be the smallest snake but also the smallest that any snake could ever evolve to be. This tiny species only lays a single egg and the hatchling is half the size of the adult threadsnake! The Christmas Island Crab is found only on Christmas Island and one other island in the Indian ocean. There are millions of these land crabs all over Christmas island. They live in burrows in the shady areas of the forest and tend to stay out of direct sunlight to avoid dehydration. They are bright red in colour and are a rather large species of crab. The most interesting thing about these crabs is the lengths they go to in order to reproduce. The only time that these crabs go to the coast is during mating season, which is based solely around the moon. The video below shows the great lengths these amazing crustaceans go to for their offspring!

The Narwhal lives in the Arctic and is commonly named the “unicorn of the sea” due to its unicorn-like tusk. This tusk has recently been discovered to be a tooth that protrudes through the left side of the narwhals lip! Researchers are yet to find a definitive reason for this tusk, however they have found that the tusk has numerous nerve endings which perhaps do serve a valuable purpose.  Narwhals have a large amount of vitamin C in their skin and because of this, have often been hunted by the Inuit. Some have suggested that the Inuit would not be able to survive in parts of the Arctic without it. There is still little known about these mystical creatures and due to this, all attempts to keep them in captivity have failed.

The Vogelkop Bowerbird is native to New Guinea and is named due to its ability to build amazing structures known as “bowers”. The male bowerbirds build these very elaborate hut-like constructions in order to attract the females. Many birds have beautiful, brightly coloured, unique feathers in order to attract a mate, such as; the peacock, however the Vogelkop Bowerbird is a rather plain species to look at. The Vogelkop Bowerbird does not require any fancy feathers as they have developed their own unique way to attract a mate. The Bowerbird builds its nest and then collects as many brightly coloured flowers; leaves, beetles, fruits, stones and pretty much anything it can find to decorate the nest in order to create these magnificent burrows! 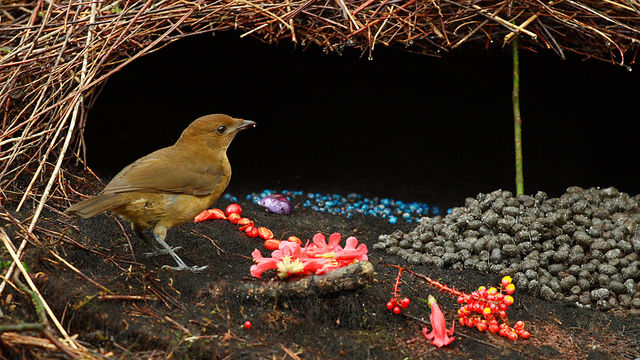 Follow our blog for your weekly animal facts! Why not leave us a comment in the box below for more information or to recommend animals for future posts!

We use cookies to ensure that we give you the best experience on our website. If you continue to use this site we will assume that you are happy with it.Ok